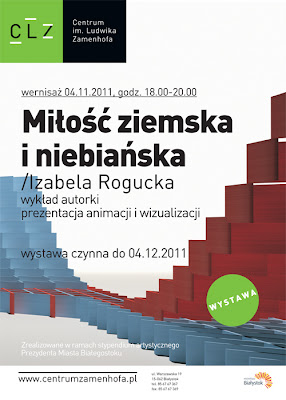 “Sacred and profaned love” is a project inspired by a spatial image of “The Battle of Addis Ababa” by Jerzy Nowosielski.
The geometric composition consisting of triangles and rhythmic diamonds frieze is an echo of pain and sorrow which the artist felt because of the war between Ethiopia and Fascist Italy. The painting created more than 10 years after these events was an expression of a personal drama of Nowosielski, thus the artist saw in it the parallel of the murder of Lemko culture in communist Poland. "The battle for Addis Ababa," was his artistic response to the act of "aggression against the eastern Christianity" as in Ethiopia and in the native Lemko. The "love of earth and heaven," is above all a tribute to one of the greatest Polish artists of the twentieth century, which was Jerzy Nowosielski. It is also the desire to achieve and to realize the real religious values​presented by instinctively and spontaneously sketched geometric figures. As the result of a geometric analysis I designed two passing wings in red and blue, which in an openwork weave create a spatial form, referring to the shape of an amphitheater. Apart from the architectural qualities I wanted to create the connotation with the sacral sphere - that means the continuous intertwining of heaven and hell. Heaven and hell in the entitled battle is the redness of the Ethiopian desert and the azure of the Abyssinian mountains. It is also the contact of two cultures: East and West, the Byzantium ornamentation and avant-garde minimalism. Heaven and hell presented by me is a confrontation between hot - cold, smooth - rough, high - low. These are the unbreakable values, which just co-existing together create harmony and indicate important landmarks. Therefore, most important in my project is to combine these characteristics and create an architectural utopia, a meeting place between human beings and human culture "discovered" in a green area, in our natural environment.
The exposition “Sacred and profaned love” is a metaphor of abstract painting shown from the geometric analysis until the final form which can serve as a functional model. Each of these steps reveals the formation of space in a pictorial, sculptural or architectural way. The decisive factor in this project is the organization of the surface according to the plane of archetypal shapes: triangles, trapezoids and squares, which reveal in the image of Nowosielski the cipher organizing theme of the work. 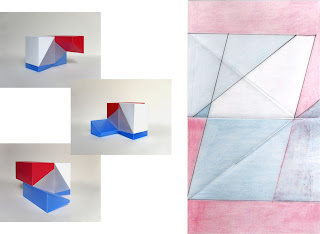 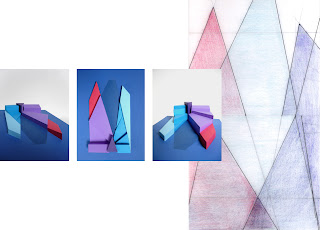 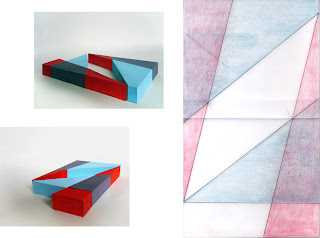 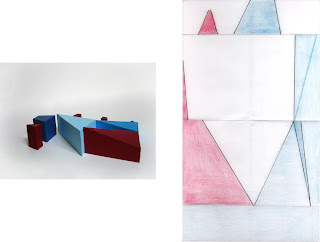 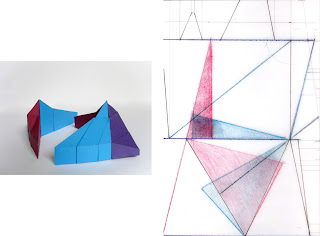 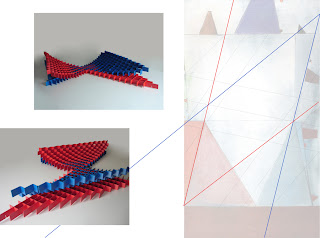